A Boy, a Toy Gun and the Bias that Killed Tamir Rice Tamir Rice: Killed by Police for Playing While Black

On Tuesday, December 29th, 2020, the Justice Department decided not to pursue charges against the officers who shot and killed Tamir Rice.  The press release that accompanied their announcement claimed the following:

“In order to establish a federal civil rights violation, the government would have to prove that Officer Loehmann’s actions were unreasonable under the circumstances, and that his actions were willful,” federal attorneys said. ” … an officer is permitted to use deadly force where he reasonably believes that the suspect posed an imminent threat of serious physical harm, either to the officer or to others.”

On November 22, 2014, 12-year-old Tamir Rice was playing with a toy gun at Cudell Recreation Center in Cleveland, Ohio. Officer Garmback and Officer Loehmann pulled up in a patrol car, less than 10 feet from the child.

Within 2 seconds of arriving, Officer Loehmann shot the boy who died at the hospital later that night.

Six years later, The Department of Justice says Loehmann’s actions were reasonable. It’s impossible to understand how shooting a boy within 2 seconds of seeing him is justifiable.

As the closing line from the movie, A Time To Kill, suggests: Now imagine he was white.

The Day of Tamir’s Murder

It was 5 days before Thanksgiving. The weather was getting colder, a light dusting of snow on the ground. The park at the Cudell Recreation Center was a popular spot for kids. There was access to WIFI, a gazebo and a picnic table. That day, the park was mostly deserted, a few people in the gazebo.

Tamir was playing with his toy gun. Like any boy, he was running around, pulling it in and out of his waistband. Pointing it and pretending to shoot.  A kid playing cowboy or gangsta or cop.

An adult in the park, who remains unidentified, called 911 and reported someone with a gun.  He referred to the person as a juvenile and twice stated that the gun was probably fake. The dispatcher, Constance Hollinger, did not convey that information to the officers.

Ms. Hollinger dispatched officers to the scene. Officer Garmback was driving and Loehmann, a trainee was in the passenger seat. Riding shotgun.

The patrol car skidded to a stop within a few feet of Tamir.  Surveillance video shows that Loehmann shot the boy within 2 seconds of arriving on the scene. He fired two shots. Neither Garmback nor Loehmann checked the boy’s vitals or attempted to render any medical attention. When Tamir’s 14-year-old sister ran to her brother’s aid, they tackled her, handcuffed, and put her in the back of the patrol car.

Four minutes later, a FBI agent and a CPD detective in the area responded to the scene and attempted to help Tamir until the ambulance arrived. He died the following day.

Issues with Loehmann and Garmback statements surfaced quickly. First Loehmann said he had shouted 3 times at Tamir to put his hands up and raised his gun, all from inside the car. When surveillance video disputed the fact, the Chief of the Police corrected the record that Loehmann was outside the car.

What he didn’t dispute was how Loehmann could have shouted three times in the 2 seconds before he shot. In fact, no one but Tamir’s family has called bullshit on that.

Loehmann told investigators that he opened the car door and told Rice repeatedly, “Put your hands in the air! Let me see your hands! Freeze!” while the car was “about 30 yards” from the boy.  Not supported by surveillance evidence.

In another unsworn statement, Loehmann said he thought the black male was 18 and he was trying to shoot at the weapon. This is directly contradicted by earlier statements that Tamir did not have the gun in his hand but was reaching toward his waistband.

There was much talk of a dispatcher who kept asking the original 911 caller about the race of the person with the gun. Though there is deadly bias in this case, that question is standard at 911 call centers. It’s asked to help officers identify who they’re looking for when dispatched to the scene.

What is not standard is the dispatcher did not tell officers that the caller said the person was probably a juvenile and twice stated the gun might be fake. Would that information have changed the outcome?

The continuing tragedy of Tamir’s story is the lack of accountability, ending with the lack of charges by the Dept of Justice.

Though a grand jury was called to investigate the shooting, they did not indict the officers. The prosecutor, Timothy McGinty, recommended that no charges be brought against the officers. Though he claims no bias – said it was their decision –   the grand jury system is structured for prosecutors. There is no defense counsel present. The cliche is a prosecutor can “get a ham sandwich indicted.”

But not a white police officer who shot and killed a black child playing with a toy gun in a park – within 2 seconds of arriving.

“Given this perfect storm of human error, mistakes, and communications by all involved that day, the evidence did not indicate criminal conduct by police.”

In another bizarre circumstance, it appears the grand jury did not take a vote. And neither officer was called to testify – they submitted sworn statements. McGinty claims the jurors declined to prosecute, but how could that happen without a vote?

The relationships between prosecutors and police are synergistic – they need each other.  The blue line extends beyond the department.

Officers Loehmann and Garmback were both placed on administrative leave with pay as is the norm.

He had previously worked as a police officer in Independence, Ohio for just 5 months. He noted on his application to CPD, he left for personal reasons – he resigned before getting fired. Independence PD felt he lacked the emotional stability to be a police officer. A prophetic decision on their part.

Civil Suit Against the City

On December 5, 2014, Tamir’s family filed a wrongful death lawsuit against both officers and the City of Cleveland. It took two years to be settled but on April 25, 2016, the City agreed to pay a total of $6M in damages.

On February 11, 2016, the City of Cleveland issued a claim against the Rice family for a $500 ambulance bill. Filed in Cuyahoga County Probate Court, the invoice claimed payment of $450 for “ambulance advance life support” and $50 for mileage was overdue. The Mayor of Cleveland apologized and withdrew the claim.

It is easy to imagine the uproar if a 12-year-old white boy in Westchester was killed by the police for playing with a toy gun. If a patrol car rolled up and opened fire on a kid, jumping around, drawing his toy pistol from his belt. Pointing it, pretending to shoot. Bang, bang, bang.

The town would go wild. The police department would be under fire.  Outraged parents would storm the Mayor’s Office. (None of them would be called thugs or rioters.) The prosecutor would work his or her ass off to indict the cops in question.

It won’t happen. Because black boys are not seen the same way as white boys. That’s what bias is. 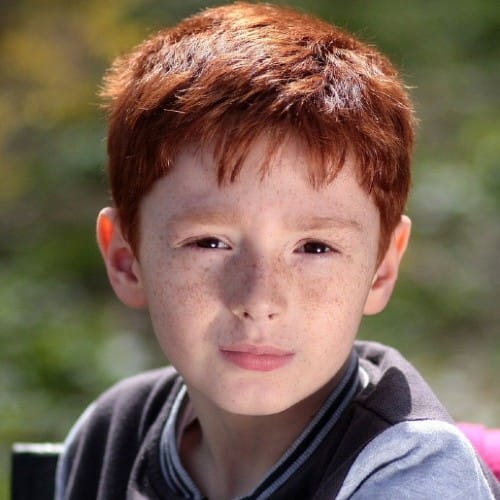 If the boy on the left was playing with a toy gun, would he be dead?

America’s inability to come to grips with systemic bias in the policing is dangerous and beyond tragic . All people have some type of bias, usually based on our upbringing or personal experience. White, black or in between, it’s impossible to reach adulthood without it.

But we don’t all have a badge and a gun that allows us to make split second decisions based off it. We can’t pull the trigger without knowing there will be consequences.

Police officers can. The law protects them from prosecution unless “willful intent” can be proven.

The Justice Department decided that the surveillance video was too grainy to determine what happened to Tamir Rice. It wasn’t too grainy. The officer jumped out of the car while it was still moving and shot the boy.

Tamir wasn’t a young boy with red hair and freckles. He was a black boy, wearing a camo hat – like Trayvon Martin wore a hoodie.  “Everyone knows what that means.”

Racism is a conscious choice. Implicit bias is not as deliberate, though none the less unfair. It is an unconscious, snap judgement based on past experiences and background. People who consistently see minorities as “less than” or “dangerous” will claim indignantly that they’re not racist.

The outcome of unconscious bias is that some people should benefit, and other people should be penalized. Bias leads us to the same outcome as racism, but includes the an element of denial.

The question is how to tell them apart? It shouldn’t be this hard, especially when it involves justice being served.